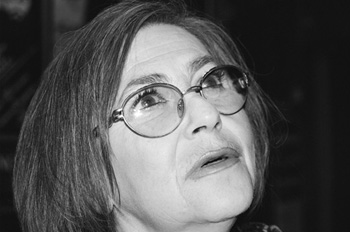 Henrietta Naumovna Yanovskaya is a director and the artistic director of the Moscow New Generation Theater. She was born in Leningrad, and graduated in 1967 from the Leningrad State Institute of Theater, Music and Cinema (LGITMIK) in the directing class of Georgy Tovstonogov. She made her debut at the Leningrad Maly Drama Theater with Leonid Zorin’s “A Warsaw Melody.” She worked for two years at the Krasnoyarsk Young Spectator Theater (staging William Gibson’s “The Miracle Worker,” Moliere’s “The Tricks of Scapin” and others). Having returned to Leningrad, she staged Tennessee Williams’s “The Glass Menagerie,” Shelagh Delaney’s “A Taste of Honey,” Lewis Carroll’s “Alice in Wonderland” and other plays. She has worked in Moscow since 1984, staging “The Widow’s Steamboat” by I. Grekova and Pavel Lungin at the Mossoviet Theater, and Alexander Galin’s “The Flight of Migrating Birds” at the Mayakovsky Theater.

In 1987 she became the chief director of the Moscow New Generation Theater, mounting productions of Mikhail Bulgakov’s “The Heart of a Dog,” Alexander Nedzvetsky’s “Good-bye, America!!!” based on a tale by Samuil Marshak, Hans Christian Andersen’s “The Nightingale,” Chekhov’s “Ivanov and Others,” Offenbach’s “Jacques Offenbach, Love and Tra-la-la,” Alexander Ostrovsky’s “The Storm,” Agatha Christie’s “Witness for the Prosecution,” Shelagh Delaney’s “A Taste of Honey,” “The Extraordinary Adventures of Tom Sawyer and Huckleberry Finn based on Mark Twain,” Tennessee Williams’s “A Streetcar Named Desire”, “The Wolf and the Seven Young Kids”, “Goodbye you,you,you…” by Fernand Crommelynck.

Yanovskaya’s productions have been recipients of the Crystal Turandot and Seagull awards. In 1998, her production of “The Storm” was nominated for the State Prize of Russia. In 2006 she received the Stanislavsky international theater award.

Henrietta Yanovskaya’s shows have often represented Russian theater at international festivals in Germany, Italy, Belgium, Holland, Switzerland, Israel, Finland, Yugoslavia, Turkey, Poland and other countries, where they have been received enthusiastically by the press, critics and audiences.

Yanovskaya has conducted master classes in Great Britain and Germany. In 1996, she staged “Cancan,” a piece based on the works of Cole Porter, in Finland.

In 2004, Henrietta Yanovskaya was named a People’s Artist of Russia.