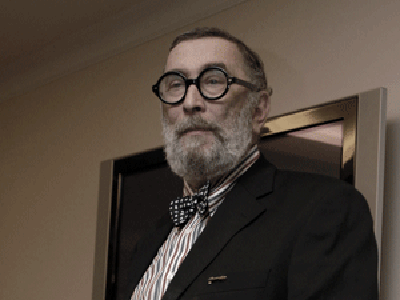 Sergei Mikhailovich Barkhin, artist, designer and architect, was born in Moscow into a family of architects. He graduated from the Moscow Architectural Institute in 1962. In 1967 he debuted as a theater designer with Edward Albee’s “The Ballad of the Sad Café” at the Sovremennik Theater. He has worked in numerous theaters in Moscow, Vilnius, Gorky, Sverdlovsk, Saratov, Kuibyshev and other cities.

Barkhin has worked with many famous Moscow directors: with Oleg Yefremov on Chekhov’s “The Seagull” and Alexander Svobodin’s “The People’s Will” at the Sovremennik; with Yury Lyubimov on Moliere’s “Tartuffe” at the Taganka Theater; with Roman Viktyuk on Tennessee Williams’s “The Rose Tattoo” at the Moscow Art Theater and on Leonid Zorin’s “The Tsar’s Will” at the Mossoviet Theater; with Valery Fokin on Albee’s “Who’s Afraid of Virginia Woolf?” at the Sovremennik.

In the 1980s he began his creative collaboration with Kama Ginkas and Henrietta Yanovskaya, designing productions of Henrik Ibsen’s “Hedda Gabler” (Mossoviet Theater), Mikhail Bulgakov’s “The Heart of a Dog,” Alexander Nedzvetsky’s “Good-Bye, America!!!” based on a story by Samuil Marshak, Hans Christian Andersen’s “The Nightingale,” Chekhov’s “Ivanov and Others,” Offenbach’s “Jacques Offenbach, Love and Tra-la-la,” Alexander Ostrovsky’s “The Storm,” Agatha Christie’s “Witness for the Prosecution,” Oscar Wilde’s “The Happy Prince,” Shelagh Delaney’s “The Taste of Honey,” a trilogy based on Chekhov stories consisting of “The Lady with the Lapdog,” “The Black Monk” and “Rothschild’s Fiddle,” Fyodor Dostoevsky’s “A Ridiculous Poem” (The Grand Inquisitor), Bernard-Marie Koltes’s “Roberto Zucco” and J.M. Barrie’s “Peter Pan.” All of these productions, excepting “Hedda Gabler,” were staged at the New Generation Theater.

From 1988 to 1990, Sergei Barkhin was the chief designer at the Stanislavsky and Nemirovich-Danchenko Musical Theater. There he designed productions of Bellini’s “The Pirate,” Prokofiev’s “Romeo and Juliet” and Mussorgsky’s “Boris Godunov.” In 1995 Barkhin accepted the appointment of chief designer at the Bolshoi Theater. Here he designed productions of Verdi’s “La Traviata” and “Aida,” Tchaikovsky’s “Iolanta” and Adam’s “Giselle.”

Sergei Barkhin is a professor at the Russian Academy of Theater Art, and the founder and headmaster of the design department there.

His most recent shows abroad have been: “Life is Beautiful” (based on Chekhov’s “The Lady with the Lapdog”), Shakespeare’s “Macbeth” (both directed by Kama Ginkas) and “Cancan” based on the work of Cole Porter (directed by Henrietta Yanovskaya) in Finland. He created the design for Ginkas’s productions of “The Lady with the Lapdog” at the American Repertory Theater and the Guthrie Theater in the United States.

Sergei Barkhin is a People’s Artist of Russia and a laureate of numerous Russian state and national awards. He is the recipient of the Crystal Turandot, Golden Mask (4 times) and Stanislavsky awards, among others. In 2004, Sergei Barkhin received the independent Triumph award, which has been given since 2000 for achievements in the fields of art and literature, and for outstanding contributions to Russian culture.